Of Kings and Paintings at the Iranian Film Festival

We are thrilled to announce that Of Kings and Paintings (directed by Sara Nodjoumi) is an official selection of Iranian Film Festival (IFF) - San Francisco, running from Saturday, Sept. 19 to Sunday, Sept. 20! Established in 2008, IFF annually showcases independent short and feature films to support Iranian cinema and culture in the San Francisco Bay Area and beyond. Stay tuned for more information about the 13th edition!

We are thrilled to announce that Sara Natelli, design director of Sara Natelli Design Boutique, was named the recipient of two 2020 Indigo Design Awards for her work on Homa Films’ logo and brand identity.

Established in 2018, the Indigo Design Awards annually recognize excellence in digital design from independent designers and creative agencies from around the globe. For her design work for Homa Films, Natelli earned two awards in the Design for Social Change category: a Bronze Award in Logos and a Bronze Award in Branding.

Natelli’s rendition of the mythical Homa bird is amplified by simplistic yet striking linework. Of her design, the Indigo Design Awards noted:

“Multiple ideas were explored to represent a calligraphic style and a color palette distinctly connected to deeply rooted traditions and cultural elements such as pomegranates, lapis lazuli, and the rich blues of the Caspian Sea.”

​Of Kings and Paintings: Screening at Yale University 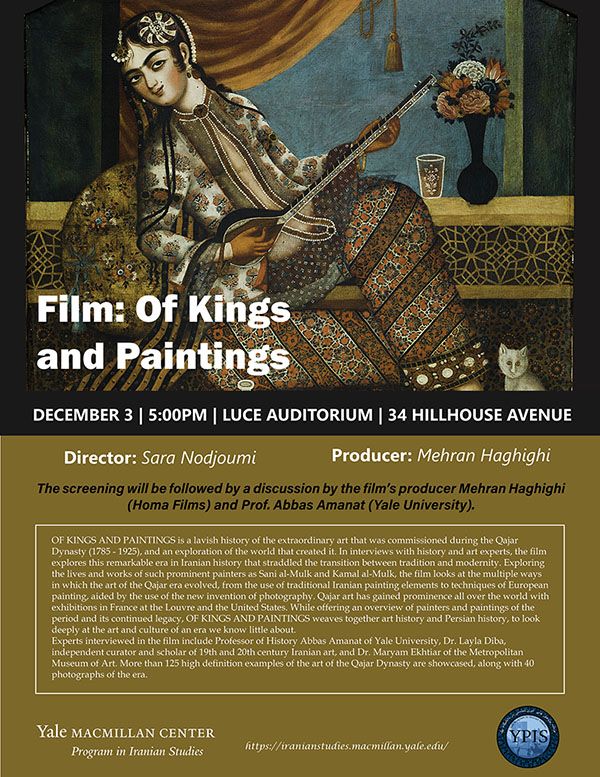 ​On Dec. 3, 2019, Homa Films’ Qajar art documentary Of Kings and Paintings screened at The Whitney and Betty MacMillan Center for International and Area Studies at Yale University. Directed by Sara Nodjoumi, the documentary has been lauded as a “valuable contribution to pedagogy through its analysis by the most influential historians and art historians of Qajar Iran.”

The screening was followed by a Q&A session by producer Mehran Haghighi and Dr. Abbas Amanat, a professor of history at Yale and one of the experts interviewed in the film.

Of Kings and Paintings, which has since been widely released, offers a chronological view of the Qajar Dynasty as it glimpses into the forces within and beyond its rulers’ courts. The film further explores the factors informing the artwork of the era by taking a magnifying glass to specific painters and paintings, many of which were previously inaccessible to the public. Iranian art scholar and independent curator Dr. Layla S. Diba, as well as The Metropolitan Museum of Art Curator Dr. Maryam Ekhtiar, also provide expert insight throughout the film.